The Carnival of Cultures (Karneval der Kulturen) is a four-day street festival that takes place in Berlin every year to celebrate the city’s cultural and ethnic diversity.

Now in its 15th year, the carnival is expected to attract approximately 1.4 million visitors between Friday and Monday (21st – 24th May) – the highlight being the parade that took place yesterday involving 4,800 performers from 70 nations.

Although the Germans always gush about Berlin’s multicultiness, my impression as a Londoner has been that the city is unexceptional in this sense apart from its large Turkish population (Berlin has the second biggest Turkish population in the world after Istanbul). So seeing the parade yesterday involving troupes from Thailand to Latin America was a pleasant awakening – there was even a group (albeit small) of Hawaiians. 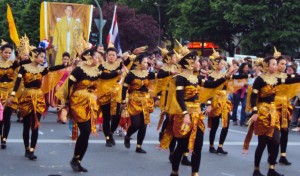 Unlike Notting Hill, this carnival is not limited to one particular ethnic background but  to literally  anyone (there was even a

Flintstones group!) From open bars and living rooms came the clash of different beats, from techno to latino, and stalls selling foods from all over the world lined the streets. Another notable difference was the lack of police presence, restrictions on where you could go and all that rubbish that’s really made Notting Hill more of a hassle than a pleasure to go to in recent years. As a result, despite the hoards of people, there was a feeling of space, safety and general laidbackness in Hallesches Tor and the surrounding areas.

For more info, photos and clips go to the rbb website…