So Berlin Literature Festival has kicked off, and we’ve attended two very different events so far.

On Wednesday evening Barbara Hammond read her dramatic monologue Eva the Chaste at Cafe Hilde. Eva has returned to Dublin after 20 years abroad to look after her dying mother. In that hour when night turns to dawn, Eva speaks about everything from the Catholic guilt and sexual repression of her childhood to her sexual promiscuity as an adult.

Her monologue is frank, peppered with dark humour and interesting turns of phrase. At its heart is her dysfunctional relationship with her mother, and the drama builds layer upon layer, towards its inevitable end.

Hammond herself read the monologue, although it is usually performed by actress Aedin Moloney. Eva the Chaste previously toured in New York living rooms, so having a group of about 15 people (including a very well-behaved baby) gathered around her armchair at the intimate Cafe Hilde seemed apt. She did not get distracted by the fact that the noise from the cafe was a bit too loud at the beginning – testament to the fact that she is an actress as well as a playwright and director – and read with an authentic, confident voice and fluidity throughout.

She seemed pleased, even a little surprised, that people had turned up to see her, and hung around to answer questions afterwards. During the conversation that followed, she explained that the character of Eva had just started talking to her one day, as characters sometimes do, and as Eva had yet more to say she was considering making the piece longer and turning it into a novella. 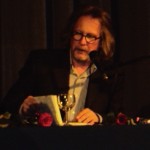 Yesterday evening well-known German columnist and writer Harald Martenstein presented his new novel Gefühlte Nähe to an audience of roughly 100 people at Kino Babylon. The book is more like a series of 23 short stories, all related from the point of view of different men who have one thing in common; a woman named N. Martenstein’s intention was to explore the love-lives of people in the late 20th century.

The first story he read was about a teacher on whom N had a crush as a schoolgirl, and the second was a conversation between two guys (one of whom had had an affair with N) about women. Both were unexceptional. The first at least had a story going for it, while the second was filled with clichés about women being princesses in love with their fathers etc that you would hear down the pub, which isn’t a problem in itself but becomes one when nothing else really happens, in which case it becomes more like a rant – or, for that matter, a column (for what are columns but rants?)

Martenstein’s particular talent is his humour, and his stories certainly got some laughs, but ultimately they lacked substance. If he weren’t such a well-known figure, I doubt he’d get these published.

He writes well in the male voice, and said that he had chosen to write all these stories from male perspectives because that was what he felt more comfortable with. However, part of a writer’s skill is to be able to write from different points of view. Moreover, even though this book is about men, there’s something chauvinistic about the fact that they are all tied together by a woman who never gets her say. And why is she simply called ‘N’, and not named?

Literary critic Marius Meller asked him a few questions between the two readings, but didn’t draw the author into any meaningful conversation about the work. In any case, he seemed more concerned about the fact that we all had to get out of the room by 8pm. There was no opportunity for the audience to ask questions, although one brave woman did grab her chance to shout out a question about whether Martenstein endorsed the kind of lifestyle that he was writing about. I bet she wished that she hadn’t bothered, because he cut her down with a comment about how he relies on the intelligence of his readers to recognise the difference between the author and his fiction. This inevitably got a few laughs, which encouraged Martenstein to go on insulting the woman, in effect repeating the same point about five times.  What an arrogant git.